The American University of Iraq, Sulaimani (AUIS) hosted its fifth annual commencement ceremony on May 28, 2016. The University conferred degrees upon 154 new graduates in multiple disciplines including engineering, information technology, English, business administration and international studies. This included 120 recipients of bachelor degrees and 34 master degree holders who now join the 528 strong AUIS alumni network, and are ready to make their mark upon the world.

The commencement ceremony was led by Dr. Choman Hardi, assistant professor and chair of the English department. AUIS Interim President Dr. Esther Mulnix welcomed guests and the graduating class of 2016, and shared the accomplishments of AUIS faculty members and students during the academic year, reflecting on how successfully the AUIS community had been able to turn challenges into opportunities at a difficult time. “We at AUIS are very pleased with your intellectual and ethical development. It fills us with pride and satisfaction to contemplate and reflect on the promise that you offer.” Moreover, she urged new graduates to “Begin in earnest to give back much of what you have received,” nurturing the critical thinking skills developed with the broad-based liberal arts education received at AUIS.

Dr. Mulnix invited Dr. Yousif Goran, minister of higher education and scientific research at the Kurdistan Regional Government (KRG), to address the graduating students. Dr. Goran talked about KRG’s endeavors in improving and investing in education in the region, and expressed hope that today’s AUIS graduates will participate as active leaders in the process of bringing about a positive change in Kurdistan’s education sector. Dr. Barham Salih, founder and chairman of the AUIS Board of Trustees, addressed the audience next. He congratulated the graduates and emphasized the importance of education in ensuring a brighter and better future for the region. "Education is key to the future. Hopefully, a decade from now, we will see graduates of this university in key places in the private sector, civil society and the government, working with other citizens in ensuring that our future is different from our past."

The commencement address to the class of 2016 was delivered by Ambassador Francis J. Ricciardone, distinguished career diplomat and President-Elect of the American University in Cairo. His speech focused on leadership in the new era. He chose to quote from Ali Ibn Abi Talib to make his point. “Do not raise your children on what your parents raised you, for [your children] were created for times other than your times,” which he said is especially relevant to this region and time where the very concept of ‘Iraq’, ‘Syria’ or ‘Kurdistan’ is changing from what the previous generations were born into. He called AUIS the most “vital monument” to the triumph of Iraqis over the ongoing conflict and tragedy. “You shine for us all as a beacon in civilization’s epic struggle against dark forces attempting to pervert religion into tools of cruelty, hate, fear, and ignorance. In your celebration of human diversity in the pursuit of knowledge and truth, you constitute the most powerful antidote to the poison of takfirism.” Talking about the special responsibilities assumed by the graduates as they leave the university armed with knowledge and skills, he said, “It now falls to you, with your parents, to advance and to redefine your great national purposes, as no less the good of all the neighboring communities represented here, all of whom must live together in peace in this troubled region.”

Quoting Jalaluddin Rumi, “Our lanterns are many, but our light is one”, he concluded, “AUIS has drawn together as one the powerful light of many lanterns:  male and female, young and old, Kurd and Arab, Turkoman, Yazidi, Sunni, Shiite, Christian -- Iraqi, and even American.  May your many-lanterned graduates and faculty ever carry forward that single light.” “What is it you plan to do with your one wild and precious life?” asked Tebeen Ibrahim, business administration graduate and class valedictorian, in the first student speech of the night. He stressed that it falls upon the graduates, the privileged ones, to give back to those less fortunate. “Today we stand here because we have had the privilege of education, and this alone is the reason why we should become better and stronger. Let us remember what we owe to those who wish to be sitting amongst us and can’t.”

Tebeen called AUIS a “beacon of hope” in a land torn by war and urged the graduates, the ambassadors of AUIS, to go out into the world with compassion and daring. “Born with the privilege to question, understand and reason, we must never stop,” he said, calling on his classmates to develop their own sense of curiosity and critical thinking rather than being manipulated by popular trends, consumerism and the media. The last speech was made by Martin Zaki Deeb, a Syrian student, who received his MBA degree at AUIS this year. “We learned in our classes that if we want to increase value, we should maximize benefits. What I can see in each and every one of you is that you are the living representation of augmented benefits that gives great value to this country,” he said. Looking forward to the future with his classmates, he said, “Let us consider this moment not an end, but rather a beginning, a beginning to a new journey, a journey with infinite possibilities.”

Dr. Choman Hardi, Interim President Esther Mulnix and department chairs presented the graduates with their degrees after the speeches. The ceremony ended on an emotional and high note with the traditional cap tossing in the air by the graduating class and a musical performance by the AUIS Oriental Music Club. About American University of Iraq, Sulaimani

AUIS was established as a not-for-profit institution in 2007, dedicated to providing a comprehensive liberal arts education for the benefit of Kurdistan, Iraq and the wider region. The University’s objective is to produce graduates of responsible character with the necessary knowledge and skills for professional and national leadership. The educational program of the university is designed to develop strength in critical thinking, the ability to communicate well, a strong work ethic, good citizenship and personal integrity.

Academic freedom is a principle guaranteed in teaching, learning, and research in a manner identical to that found at regionally accredited colleges and universities in the United States. The university does not discriminate on the basis of gender, age, race, ethnicity, religion, occupation, politics, economic standing, or any other common human demographic factor in its admission of students or administration of the University or its policies. 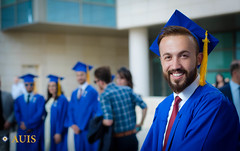