February 11, 2016    - The AUIS Center for Gender and Development Studies (CGDS) and the Institute of Regional and International Studies (IRIS) hosted a conference to discuss the future of the Ezidi community in Iraq. The conference brought together Ezidi survivors of ISIS atrocities, agencies working to document these atrocities, practitioners providing services to survivors, academics working in the field, and relevant international experts to create an in depth understanding of - and generate action on - one of 21st century’s worst crimes against humanity.

Related article: Yezidis vs ISIS at the ICC by Timothy Waters who attended as one of the speakers at the conference.

The panel discussions at the conference focused on four main areas of the conflict: documentation for a genocide case, trauma and recovery for the victims, as well as efforts at reconstruction and reconciliation for the displaced Ezidi community. Click on the links below for details of the speakers, and a summary of each panel discussion in English, Kurdish and Arabic languages.

The conference opened with welcoming remarks from Christine van den Toorn, director IRIS, and Dr. Choman Hardi, chair of AUIS English department and founding director of CGDS. Dr. Hardi formally announced the launch of CGDS at the conference, saying, "It is an honor to launch the Center for Gender and Development Studies (CGDS) in this important conference. We firmly believe that the knowledge produced in academic institutions needs to be disseminated within the relevant communities, using different outreach strategies. A holistic approach to tackling gender inequality is essential." She continued to say that gender activism is most effective when informed by feminist knowledge. "Normative change in gender relations can only happen when feminist knowledge has been produced and shared. This is why we believe that academic work and activism should be more firmly connected. Activists need to know more about theoretical issues and academics should be more involved in activism." The Center hopes to amplify women's voice and agency nationally and within their communities as a means of social and economic development and promote gender informed practices in professional and humanitarian contexts. Read the text or watch the video of Dr. Hardi's opening speech.
The conference began with a keynote speech by Monique Villa, CEO Thomsan Reuters Foundation and founder of TrustLaw and Trust Women. Villa highlighted that violence against women and girls remains the most widespread human rights violation in the world. She called the atrocities committed by Daesh against the Ezidi community genocide and war crimes, and stressed that documentation of accurate and fair testimonies of survivors and victims are key to prosecution of the criminals. In order to respond to the threat of Daesh, it is crucial that the voices of the women are heard and heard now, said Villa, and journalism is a key weapon to fight the Daesh narrative. Read more about her opening speech here, or watch video of her talk.
The conference also featured photo exhibitions: Life in Khanke Camp by Ezidi women photojournalists and Continued Tragedy by Soran Naqishbandy.
During the conference, AUIS recognized the efforts of Kurdish activists who have been working tirelessly to rescue the Ezidi women and children captured by ISIS and in bringing the plight of the Ezidi community to the international platform to mobilize efforts for reconstruction. Awards were presented to Khalil Asef, Amina Hassan, and Osman Darwish for rescuing women from ISIS captivity. Another award was presented to Nadiya Murad, an Ezidi survivor, who gave her testimony at the UN Security Council in December 2015, and who has now been nominated for the Nobel Prize. The award was received on Murad's behalf by Amed Shingaly, a correspondent for Kurdsat, who has been covering events in Sinjar since the beginning of the conflict. Watch the award presentation in the video.

Nadia Murad receives an award by #AUIS, delivered to her by @ShingalyAhmed #Ezidi #Yazidis #TwitterKurds pic.twitter.com/yeqpYouX52

The conference was covered widely by the local media and some international outlets. You can find articles, news reports, and video coverage of the conference by various media outlets here. 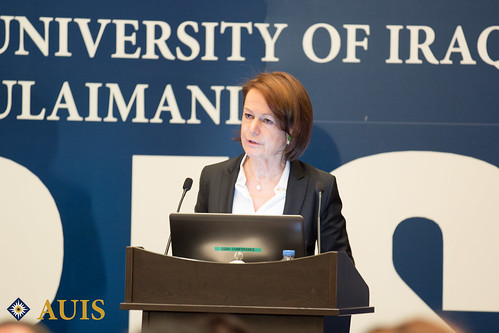