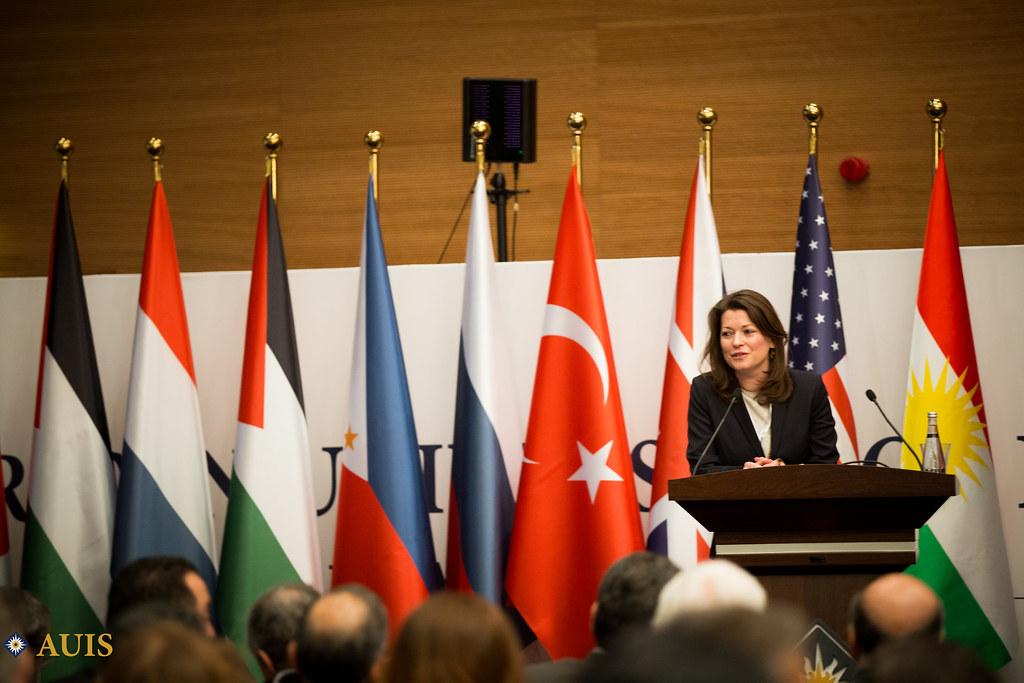 UPHEAVAL AND TRANSFORMATION IN THE MIDDLE EAST: CONFRONTING ISIS AND BEYOND

Participants included high-level officials from the central government of Iraq and the Kurdistan Regional Government (KRG). Prime Minister of the KRG HE Nechirvan Barzani gave the inaugural address, while the Foreign Affairs Minister of Iraq Ibrahim Al-Jaafari delivered the keynote speech. The National Security Advisor to the Iraqi Government Faleh Fayadh, Special Presidential Envoy for the Global Coalition to Counter ISIL Brett McGurk, Peshmerga Commander Jaafar Mustafa, and the Governor of Ninewa Noefel Humadi Sultan spoke on the first panel, focusing on different forces involved in the military operations against ISIS. The Speaker of the Kurdistan National Assembly Yousif Mohammed Sadiq, the Iraqi Minister of Higher Education Hussein Al-Shahrestani, leader of the Mutahidoun Alliance Osama Al-Nujaifi, and Special Representative to the Secretary General for Iraq at UNAMI Jan Kubis participated on the second panel and examined the political, economic, and security challenges facing Iraq. Saleh Muslim, the  co-chair  of  the  Democratic  Union  Party (PYD), Hemin Hawrami, Head of Kurdistan Democratic Party foreign relations  office,  Salman  Al- Jumaili, the Iraqi Minister of Planning, along with Hasan Turan, an  Iraqi  MP,  and  Ambassador Ryan Crocker, former US Ambassador to Iraq looked at the “Clear, Hold, Build” as principle components of defeating ISIS in Iraq and Syria on the third panel. The Former Secretary General of the Arab League Amre Moussa, the KRG President’s Chief of Staff Fuad Hussein spoke about  regional dynamics on the fourth panel. Qubad Talabani, the KRG Deputy Prime Minister, Adil Abdul Mahdi, the Iraqi Minister of Oil, Ali Alaq, the Governor of Iraq’s Central Bank, and US Ambassador to Iraq Stuart Jones participated in the fifth panel on the economic crisis and the challenges of reform. Ranj Talabani, the head of Zanyari (Intelligence Services), presented on a panel discussing  the extremist narrative in militarized societies. Leading journalists, analysts  and  thinkers  were  also major contributors to the discussion both on the panels and in the audience. Thomas L. Friedman, well known New York Times columnist and author, was in the audience on his second trip back to Sulaimani since delivering the commencement speech at the third AUIS graduation ceremony in May 2014. Jane Arraf of Al Jazeera, Liz Sly of the Washington Post, and Cengiz Çandar  were amongst the leading journalists covering current affairs in the Middle East who participated in, and attended the forum. Taher Barake, the presenter of Political Memoirs at Al Arabiya took part in the Forum by moderating a panel on Iraq’s future prospects.


Download the proceedings of the 2016 Sulaimani Forum here or by clickling the image below.